A Quick Trip Down Memory Lane 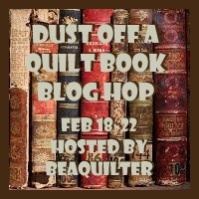 Several years ago, an online quilters group I belong to got into a discussion about other activities we enjoy. Cooking, travel, writing and photography were mentioned quite often, but it turned out nearly all of us had two things in common – we have pets (mostly cats and/or dogs), and we are avid readers.  Most of us also had a sizable library of quilting books.

My own collection began with one of the few quilting books available when I made my first quilt in 1973, Ruby McKim’s 101 Patchwork Quilt Patterns. Rotary cutters hadn’t been invented yet, so every one of the 1755 (but who’s counting) 2.5″ squares in my 9-Patch quilt was traced with a pencil around a cardboard template and cut with scissors. Of course, the template’s edges got a bit “softer” with each tracing, so perfectly matching seams were a dream, not a realistic goal. It wouldn’t have won any prizes, but it kept me warm, and that was the point, and I was hooked.

Soon after I began quilting, I discovered Amish quilts, and bought a couple of books about the quilts made in Pennsylvania. I’ve always loved bold graphic designs, and my father’s family is Mennonite, so it was probably a natural attraction.

One thing that struck me was that – contrary to the “rule” that Amish quilts must be mostly black or  dark and “cool” colors – most of the quilts in this book have very little black. And bright? There were some of the most over-the-top color combinations I had ever seen. I loved it! Colors that weren’t acceptable for clothing could be used in quilts.

Here, my “Dust off a Quilt Book” blog hop post segues into my “Magnificent Mini” challenge blog post for Island Batik fabric, Aurifil threads and Hobbs batting. They supplied the materials for this project.

I chose to make a miniature version of the Amish classic “Trip Around the World.”

I had quite a bit of fabric left over from my 2018 “stash” of Island Batik Fabrics, including this stack of 10″ squares from the Lavendula collection. I chose a navy blue from the “foundations” collection to go with it. I decided my center would be 9″ x 9″ (finished size), and the individual squares would be 1″ finished. My borders would finish 3″ wide. 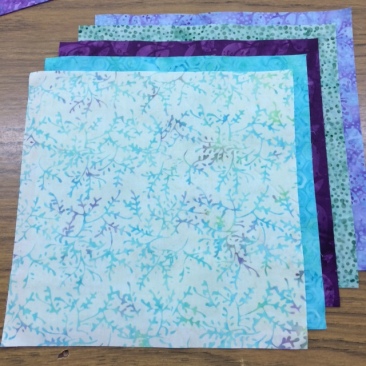 I needed five colors for the center of my quilt, so I chose five of the more “solid” color squares, and cut four 1.5″ x 10″ strips from each square. 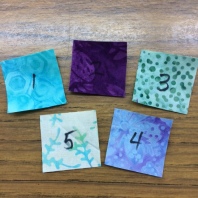 Next, I sewed the strips into stripsets, rotating the colors. To keep things in order, I cut a square from the scraps of each color and numbered them,

so I could lay out the squares in the order the strips should be sewn.

Next, I had to make five strip sets, each with four strips, and rotating the colors properly. To help keep things in order, I cut a square from each of the scraps and numbered them. I laid out the squares in order for each stripset.

Then I cut four 1.5″ segments from each stripset.

I decided I wanted my largest diamond to be the lavender, so I set two of those strips aside, and began building two halves, working from the center strip out, adding matching strip to each side as I went.

This rotation meant the center square would be white, so I cut a 1.5″ x 1.5″ square, and sewed it to the turquoise ends of the two remaining strip. This became the middle row of my centerpiece.

Now for the borders: 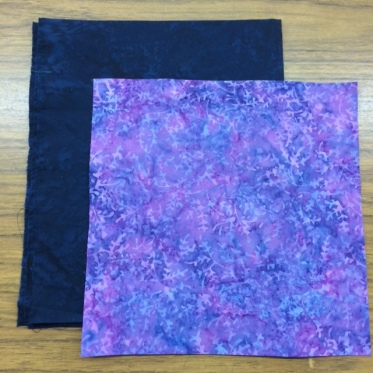 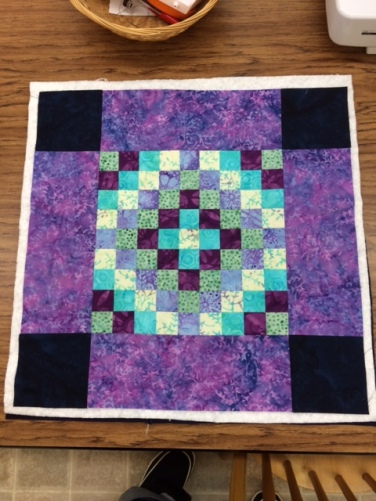 With the borders in place, it was time to layer this mini up with a bit of Hobbs Heirloom 80/20 batting and figure out how to quilt it. 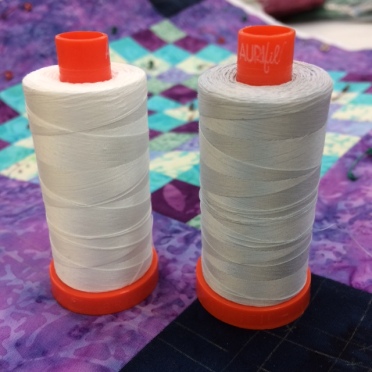 My collection of Aurifil threads is still pretty limited…but growing. These were my best choices for this project. I decided the white would be too stark, while the icy blue would show up, but not overpower the fabric.

First, I decided to emphasize the squares in the center by quilting concentric squares. I used the inside edge of the toe of my 1/4″ foot to space my quilting lines about 1/8″ from my seam lines. 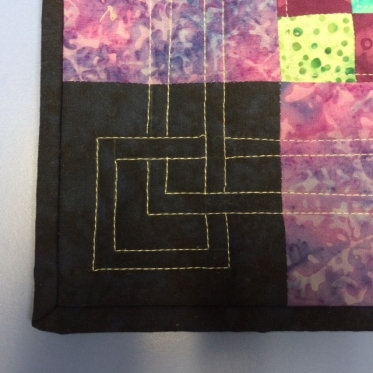 I came up with this simple little Celtic style detail to dress up the corners just a bit.

Add a binding, and a title “Across the Pond”, and this little quilt celebrates the journey of two of my Quaker ancestors, Thomas Stackhouse and Grace Heaton, who arrived in Philadelphia aboard  The Lamb. In 2001, I got to spend a day in the towns of Settle and Giggleswick, Yorkshire, UK. It felt like a homecoming of sorts, to walk on  streets that they may have known centuries ago.

Thanks to Bea for thinking up and hosting the “Dust Off a Quilt Book” Blog Hop! I can’t wait to see what the other bloggers have found on their bookshelves. Many of them, like Bea and I, are also Island Batik Ambassadors!

32 thoughts on “A Quick Trip Down Memory Lane”

This site uses Akismet to reduce spam. Learn how your comment data is processed. 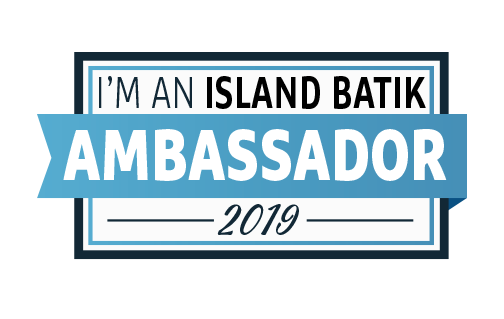