And guess who’s block is right there on the cover. 🙂

This block was named for one of my favorite spots in Glacier National Park. It’s just a few miles up Going-to-the-Sun Road from the St. Mary’s entrance to the park.

The “Sun” isn’t in the center of this block. It “rises” when you put four blocks together, as I did in this 32″ x 32″ wallhanging:

In making this piece, I made one change to the block as shown in 100 Blocks. 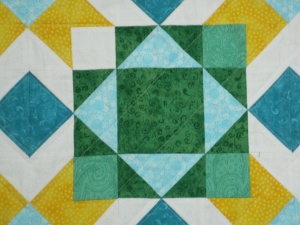 In each of the four blocks, I substituted a 2.5″ white square for one of the 2.5″ medium green squares. 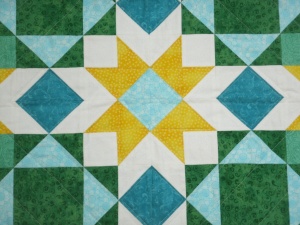 This made a twelve-point white star surrounding my “sun” in the center of the piece. Sew the four blocks together.

The border is made in sections.

You will also need four 4.5″ white squares for the corners. 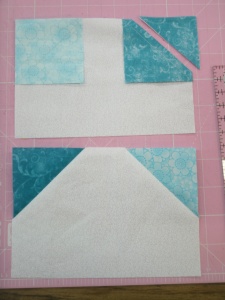 Sew the units into four pairs, matching the dark blue corners. You should have eight pairs. Sew two pairs together to make a border strip…you will have four.

Sew a border strip to two opposite sides of the blocks.

Sew 4.5″ white squares to the each end of the two remaining border strips and sew to the other two sides of the blocks.

Layer your batting, backing and top and quilt as desired. I quilted around my center “sun” and then concentric diamonds following the lines of my piecing.

I used my gold fabric for the binding.

Since I was a member of the 2013 Quiltmaker Scrap Squad, I have been hooked on “scrapping” patterns, including my own. I will be giving this block a good scrapping soon, so bookmark this blog and check back often!

Leave a comment below and tell me…what colors will you use for your Rising Sun block? The winner will be chosen at random on Sunday morning, Nov 22, 2015.

PS: Did you see the Bitty Block I designed for the Quiltmaker blog today?

Check it out HERE!